The term Diabase refers to a variety of rocks formed by the injection of gabbroic magma or lava as shallow dykes and sills under the surface of Earth, during a volcanic eruption. It exhibits a fine-grained structure which is ideal for Metrology applications. While Diabase is the preferred name in North America, it is also known as Dolerite, and as Gabbro when the grains are coarser. 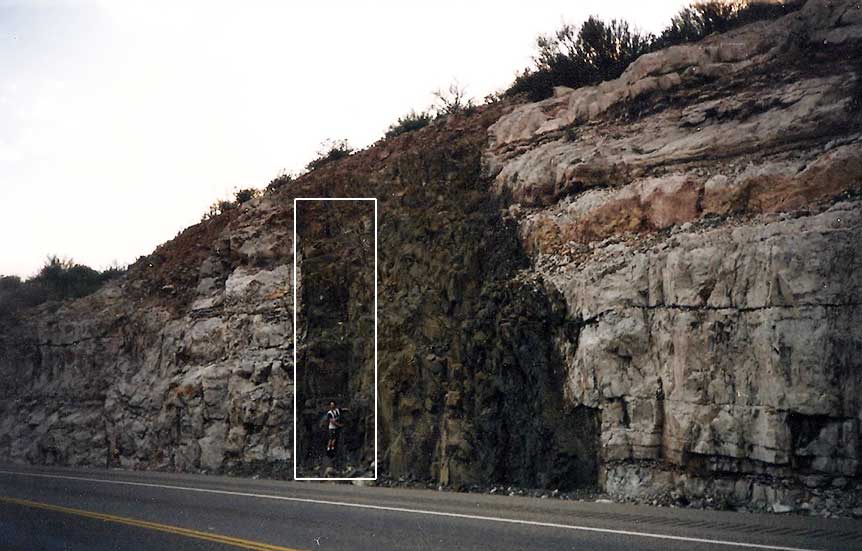 The dark, vertical rock against which the man is standing is a vertical “dike” of Diabase in a horizontal limestone bed.

Photo: By Jstuby at English Wikipedia – Transferred from en.wikipedia to Commons by ZeWrestler., Public Domain, https://commons.wikimedia.org/w/index.php?curid=8321513

Did you know that granite was first used in Metrology during the Second World War?

During that time, all metal supplies were directed towards making weapons, and manufacturers needed more surface plates to inspect these weapons. A very enterprising monument and metal shop owner (Wallace Herman) in America, and his innovative employee Donald V. Porter, started using granite in place of metal for surface plates. Diabase is also used for precision machine bases, optic and medical equipment and custom or special purpose equipment.

Diabase is fine-grained. Primary minerals are dominated by the plagioclase feldspar known as labradorite. Most of the remainder consists of pyroxene, hornblende and quartz.

Is Diabase Different from Granite?

While it is closely related to granite, it is not the same. Diabase lacks several of the minerals (such as quartz and mica) which give granite its distinctive grain structure. The lack of quartz means that Diabase is slightly less resistant to wear than the hardest granites. However, this is offset by the lack of mica, which is very soft and tends to flake out of the granite surface, leaving pits.

Diabase is denser than granite, weighing about 3150 kg/m3, while most granites weigh between 2600 & 2700 kg/m3. It is also less porous and more stable, which means that it is easier to machine, and a smoother and more uniform surface finish can be achieved.

Why Does GMT Use Diabase Exclusively For Metrology Reference Products?

In general, we use Diabase as the material for multi-dimensional, very high-accuracy applications that require a very smooth, stable surface due it’s properties such as density and stability. Typical application includes angle plates, parallels, master squares, and straight edges.

Diabase is an excellent choice in Metrology applications due to its superior stiffness, vibration-damping properties and temperature stability. It is also resistant to chemical degradation and corrosion.

However, very large Surface Plates cannot be made with Diabase, as large slabs beyond 3m2 in size cannot be found in nature. For these applications, the best available quartz bearing granite is used. The product will, however, be slightly thicker than a corresponding diabase piece, to increase stiffness.

Scroll back to top